Shane* was a fit and healthy twenty-two year old man. Although his hair line receded slightly a couple of years ago, it was only in the last six months that he had noticed the hair thinning all over the top of his head. This hair loss so early in his life had rocked his confidence. Getting ready to go out on the town with friends on weekends had changed from a fun experience to one that stripped him of his self-assuredness. There was nothing he could do to make his hair look good and this resulted in him wearing hats almost everywhere he went.

The consultant he met with after contacting Ashley and Martin for a free consultation diagnosed Shane with androgenic alopecia, better known as male pattern baldness. The consultant then went on to explain how Shane’s goals of stabilising the loss and thickening up his hair would be best achieved with a combination of prescription medications, herbal supplements and laser therapy.

Happy with the advice he had been given and desperate to reverse his Norwood III loss, Shane enrolled on the proffered treatment program. The fact his program came with a money back guarantee gave Shane extra confidence that he would see the projected results.

Treating his hair took Shane no more than three minutes per day and it was not long before this small commitment started to produce big results. Not only did his hair density begin to return to its former state, but the recession in his temporal region was looking less pronounced. The new regrowth prompted Shane to start taking better care of his hair, styling it in the morning before leaving for work.

The early regrowth Shane was seeing in his progress photos made him look forward to the improvements he would see in the coming months. 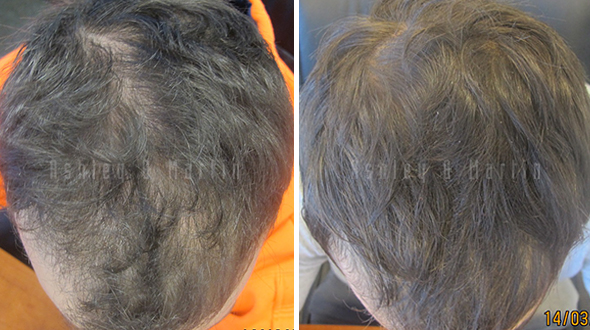