Five months into Oscar’s* treatment program, he was astounded at the phenomenal results he was seeing. The 25 year old lover of travel had come to Ashley and Martin with a Norwood III loss characterised by a generalised thinning throughout the vortex, slight recession in the temporal region and a diffuse frontal hair line. This loss of density had happened over the course of two years, aging him a great deal more. The hair loss he had inherited from his grandfather came hand in hand with a loss of self- confidence. For six months before starting treatment, the concerns Oscar had about his appearance had been prompting him to consider finding a hair loss specialist to help him.

The dramatic increase in hair density Oscar had gained with his RealGROWTH® program was evident across the entirety of his scalp. The topical solution he was applying daily had done its job of shedding the hair in its dormant, resting phase in order to promote new, healthy growth of thicker and, in Oscar’s case, darker hair. At the same time the anti-androgenic and herbal tablets he was taking had blocked the formation of the majority of the DHT causing his hair follicles to shrink before entering dormancy.

The process of how Ashley and Martin’s RealGROWTH® medical program had been explained to him during his free consultation, making it evident why the over the counter shampoos he had tried treating his hair loss with before had not worked. The shampoo may not have worked, but when he had first hit enter to submit his request for a consultation, Oscar had not realised Ashley and Martin’s hair loss treatment would reverse the majority of the damage done in less time than he had been considering treating it. 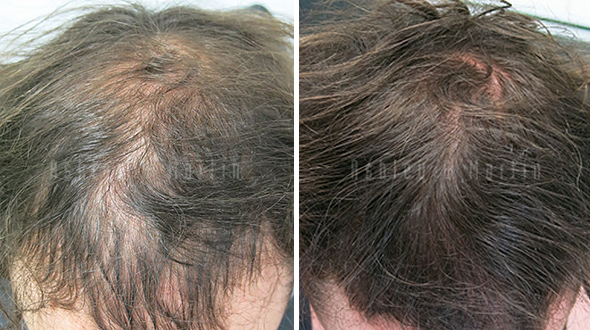