Astor* was beginning to get concerned about his hair loss. The recession in his temporal region was getting too deep to ignore and he knew his hair was thinning on top also. His girlfriend, a hairdresser, told him about Ashley and Martin and encouraged him to call.

Astor’s Norwood level III hair loss was diagnosed as androgenic alopecia by his Ashley and Martin consultant and, with a combination of anti-androgens, herbal supplements and laser therapy, could be reversed.

Sure that he wanted to commence treatment, but unsure if he wanted to pay upfront or in smaller instalments, Astor booked an appointment with the clinic hair loss doctor later in the week.

Happy that Astor was in good health and would get the benefit he was looking for from the RealGROWTH® program, the clinic doctor prescribed his anti-androgens and topical solution. He was also provided with all the herbal supplements and scalp cleansing products he would need for the entirety of his program. Astor had taken the days in-between consult and doctor’s appointment to think things over and decided to enrol having paid for the program up front.

Travelling overseas to visit family for extended periods of time, Astor found it difficult to attend the clinic regularly for laser therapy appointments.

Eight months after he had first called Ashley and Martin for help, he sat opposite his consultant to review all the changes that had taken place over the course of his program. Astor had not been sure if the treatment would work for him to begin with and was uncertain that much had happened at all.

Comparing the photos that had been taken in his initial appointment alongside the ones that had been taken minutes before, Astor was reminded of how thin his hair had been before coming to Ashley and Martin. His girlfriend had mentioned that she had noticed the new hair growth coming through thicker and healthier but until he saw his progress photos, Astor had not realised what great progress he had made on the RealGROWTH® program. 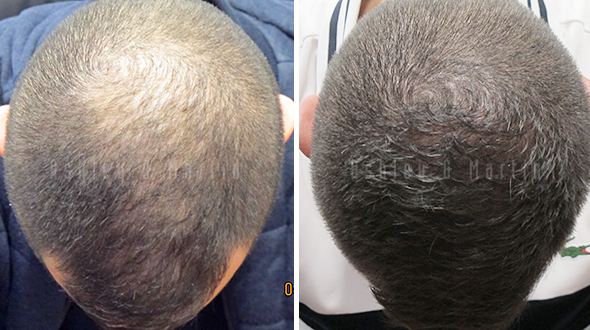