Gerry* and his mates all took the mickey out of each other on a regular basis.  One thing they were constantly ribbing on him about was his hair loss.  This good natured teasing kept his thinning hair at the forefront of his mind.  He had been seeing his GP to try and address his hair loss, however, after two years of trying without success, his GP referred him to Ashley and Martin.

It was now a decade since Gerry first saw the signs of the same hair loss his grandfathers suffered from.  Wanting to shop around for the best hair loss treatment available, the 32 year old had been to see another hair loss clinic before contacting Ashley and Martin online.  The medical treatment plan his Ashley and Martin consultant offered him was completely contrary to what the other clinic had led him to believe Ashley and Martin offered.

Fit and healthy, the only other factor impacting on Gerry’s hair loss was the stress he had been under at work in the last two years.  The consultant told Gerry he believed he was a good candidate for a RealGROWTH® medical hair regrowth treatment program.  No transplant necessary.  Due to the distance from the clinic, the consultant offered Gerry the option of adding a Laser Cap into his program to deliver laser therapy to his scalp.

Sceptical that the laser therapy would work, Gerry opted for a RealGROWTH® medial program and signed up there and then.

Returning to see his consultant for a progress check-up four months later, Gerry was ecstatic about the difference treatment had made to his hair.  When Gerry had first come in, he had been concerned about the thinning at his frontal hair line as this is what he saw in the mirror every day. While Gerry had been made aware regrowth across the balding area at his crown may limited due to the excessive amount of loss he had already experienced, he had simply wanted to prevent any further loss.  Looking at his progress photos side by side he could not believe how bad his hair had been before. These photos highlighted that he had achieved so much more than simply halting his hair loss.  The outcomes he was now looking at on screen had already been noticed by his fiancee and mother.  Both women had commented on the improvement in quality, density, and health of his hair.

And on top of it all, Gerry’s mates had stopped ribbing him about his bald spot. 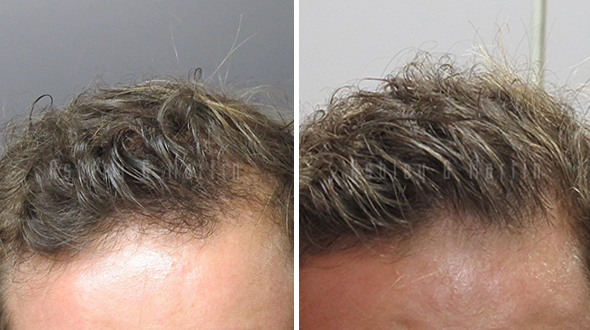