Murray* had had enough of hiding his hair loss under a hat. It had been almost three years of consistent loss that had led to Murray’s current situation; noticeable thinning existed from his frontal hair line to the vertex. Searching for solutions to hair loss for men with hair loss like his online, Murray came across the Ashley and Martin website. A few hours of research later, it was apparent to him that Ashley and Martin was the place to go to solve his problems. He used the online enquiry form on our website to book his free consultation.

The easy-going, professional environment Murray’s consultant created made him feel comfortable in exploring the information he was given regarding his hair loss and how to treat it. Because he acted quickly and sought professional help before his hair follicles were beyond rescue, Murray’s consultant was in a position to give him good news about the expected outcome of medical intervention. Using the RealGROWTH® range of therapies, the consultant was confident Murray would be able to regain the majority of his lost hair. He booked an appointment to see the clinic hair loss doctor, keen to begin treating his hair as soon as possible.

After four months of daily treatment at home, Murray was seeing a remarkable increase in the amount of hair covering his scalp. Discussing these changes with his consultant at his first Ashley and Martin Review, the two men were impressed by the glaring differences in Murray’s progress photos. The prescription medication and herbal supplements that made up Murray’s RealGROWTH® program had worked to stop the excessive hair fall and regrow hair in the sparse patches throughout Murray’s frontal hair line, vertex and crown. Seeing his hair from all the different angles in the progress photos highlighted that his treatment had achieved exactly what the consultant had said it would. At this point, Murray could not have been happier. 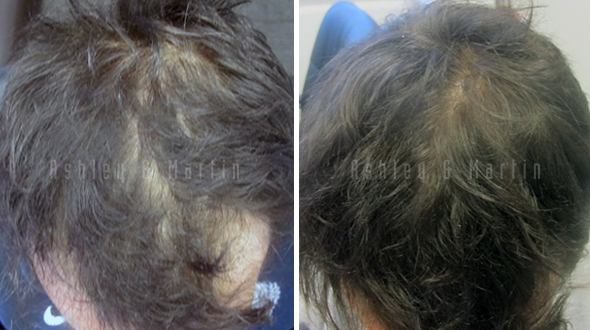